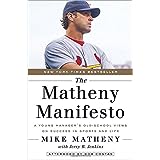 After his major league career as a catcher, Mike Matheny was asked to coach youth baseball. He wrote a five-page letter explaining to parents when he expected from them and the players if he accepted. The youth would be taught to play the game right and with respect and class. Emphasis would be on character rather than winning. The parents were to agree not to coach from the stands or yell at the players or the umpires. The letter went viral and became known as the Matheny Manifesto.

Matheny saw the problem in youth sports was parents and coaches who made the game more about their ego than about the players learning to play the game the right way.

Parents signed on to this approach that emphasized service, teamwork, discipline, excellence, responsibility, and leadership with biblical truth as the moral compass. Matheny admired and was influenced by John Wooden and his principles for coaching and life.

These principles proved successful in youth baseball, and they are proving successful in the major leagues as Matheny is now in his fourth year as coach of the St. Louis Cardinals.

Mike Matheny has earned the respect and trust of those who know him. In his life and managing, he is consistent with his principles. He does not let his fierce competitive spirit deter him from respecting the game and playing the game right way and with class.

The book blends biography and coaching philosophy. He illustrates his approach to the game with experiences from his life and others who have influenced him.

Many will benefit from reading this book: coaches, parents, players, and anyone who wants to be a success in life.

In his original letter to parents, Matheny clearly states the role Christianity plays in his life. “My Christian faith guides my life, and while I have never been one to force it down someone’s throat, I also think it’s cowardly and hypocritical to shy away from what I believe. . . . when the opportunity presents itself, I will be honest about what I believe.”           (p. 14-15).