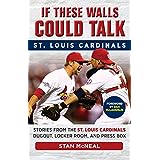 McNeal records personal stories and information about Cardinals in the 2014, 2013, 2012, and 2011 seasons and some Cardinal legends. In these four seasons, the Cardinals averaged 99 wins per season including winning a World Series, two National League pennants, and reaching four National League Championship Series. The Cardinals transitioned from Hall of Fame manager, Tony La Russia to Mike Matheny and lost the future Hall of Famer Albert Pujols, yet they continued their winning ways. The closing chapter features stories about Cardinal greats, including Bob Gibson, Red Schoendienst, and Stan Musial.

Cardinal fans who followed the Cardinals during this “Golden Age” in their history will enjoy this book. It is a great book to read when you have only a few minutes since the stories are only two or three pages. The book helps the reader see the players as persons, not just baseball celebrities. The readable style of writing makes If These Walls Could Talk and enjoyable book to read.