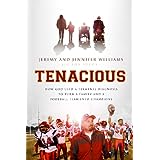 Tenacious; How God Used a Terminal Diagnosis to Turn a Family and a Football Team into Champions by Jeremy and Jennifer Williams with Rob Suggs (Thomas Nelson, 2013) 270 pages.

Tenacious tells the true story of a family that faced the challenges of having a son with Spinal Bifida and the father with ALS 9Lou Gehrig’s Disease).

Jeremy was small for a football player but he played with a driving passion and earned a scholarship at Memphis State. He filled for an injured player in his first game and started for the remainder of his four-year career.

Jeremy and Jennifer Bolles began dating their senior year in high school. They waited for marriage until just before his senior year in college (1993).

After graduation, he worked as an assistant football coach for a few years. Then he became head coach at Greenville, Georgia, about sixty miles from Atlanta. He inherited a lackadaisical and undisciplined football team and a school with little school spirit. By motivation, weight training, and discipline he led the team with a 1-9 first-year record to 10-0 season record in his final year (2010). Jeremy was named National High School Football Coach of the year.

Jeremy did not push his faith on anybody, but he lived it consistently. His life influenced others for Christ. Christian faith sustained the Williams in their highs and lows while dealing with a handicapped son and Jeremy’s debilitating condition with his ALS.

The Extreme Home Makeover blessed the family with a beautiful handicapped-accessible home. The community helped the family in many ways.

Tenacious is a football story, a love story, and a story of tenacious faith in the face of incredible adversity.