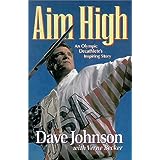 Dave Johnson is a two-time Decathlon Olympian and current World Record holder for the second day events of the decathlon. He won the decathlon Bronze Medal in tine 1992 Barcelona Olympic Games while competing with a broken foot.

He was made famous by the “Dan vs. Dave” Reebok ads of 1991-1993. This opened doors for other commercials and gave a platform for his to speak to youth from a viewpoint as a positive role model.

After he retired from his Olympic career in 1997, he has served in coaching and education.

In Aim High, Mr. Johnson describes how his parents were not home much, and he wanted to find his identity and be someone. He became a troublemaker. He said, “I did not want anyone else telling me who I should be or what I should do. I didn’t want anyone controlling me. When someone put any kind of restriction me, I immediately did the opposite. Laws and authority figures by definition set limits, so I sought to defy anyone those limits.” This is a definition of a sinful person apart from God. He became a leader of a gang of guys who vandalized, drank, stole beer (at one period of months over $5,000 worth), they broke into houses and stole things, and even harmed others.

When his family move, a change came into his life. Christian teammates and coaches helped him come to know Christ. His faith enabled him to face difficulties in his decathlon experiences and in life, for example when they lost a child. As the expected Gold Medal winner in the Barcelona Olympics, unknown to the crowd he participated with a broken foot. With the encouragement of his coaches, he fought to the end. He said, “You know the Olympics is not really about winning gold medals; It’s about that phrase in the Olympic creed: ‘Not to have conquered, but to have fought well.”

Two things stand out in the book to me. One is the evil possible when a person acts selfishly being his or her own god. The second is the wonderful transition that can come in a person’s life who surrenders their life to Christ.